July 02, 2021
Based on experience with tyre wear from the previous season, I knew that a set of Hoosier A6s wouldn't last long with the stock setup. With sticky tires, the rubber bushings deform too much, throwing off the alignment. Time for an upgrade. I was lucky to source a front and rear Energy Suspension poly bushing kit that someone had purchased, but not installed.
Removing and reinstalling the upper and lower suspension arms was easy, although quite a bit of work on the rear, as the driveshafts have to be removed. The real challenge was to remove the rubber bushings. I tried with basic hand tools and a bench vise, but quickly gave up on the first bushing.
Time to expand the toolset in the garage. A hydraulic bench press would be nice, but would take too much time - and money - to source. I found a nice toolkit for removing and installing bushing in the local hardware shop, which made the work surprisingly easy. With this toolset, you only need hand power to remove the bushings. 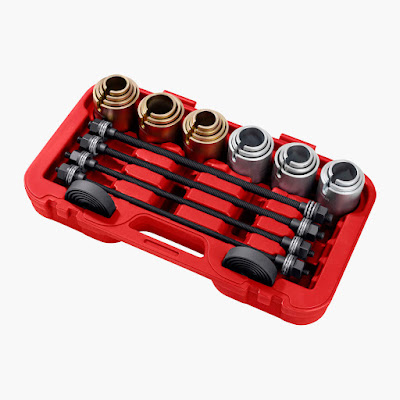 Removal of rubber bushing from a control arm

Installation of new poly bushing in a control arm. I kept the bushings wet with brake cleaner, to aid as a temporary lubrication. I didn't want permanent lubrication on surfaces which are not supposed to move relative to each other.

The shells have to be reused with this kit. Unfortunately, the rubber is glued to the metal. I tried all kinds of tools, but the easiest solution was to simply burn off the rubber. The rubber was heated by a propane torch, and when it had caught fire it continued until all the rubber had disintegrated. 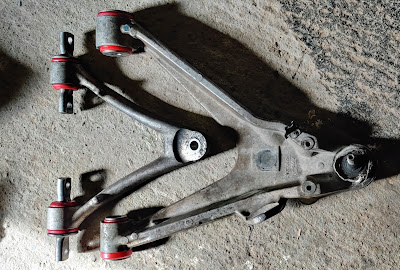 Front control arms completed
On the first test drive afterwards, I could hardly notice any difference - with little to no increase in cabin noise or harshness. Quite the opposite of my experience after installing poly bushings on a Subaru WRX, which completely transformed the handling (the car felt 500 kg lighter).
There is still a feeling of "compliance" or delay on directional changes, which could be caused by the properties of the stock transverse leaf spring or some of the rubber parts still left (shock absorber top mounts, leaf spring mounts).
I guess/hope the real payoff will be at  the first trackday, where more load is put on the suspension.