Heat management is still an issue on track days, so I decided to add a Trackspec hood vent.

-exactly what my C5Z needs!

I managed to source a used T1 hood vent in good condition. For the install, I decided to use countersunk hex screws rather than pop rivets, as I don't like the look of pop rivets (it is not a kit car, after all). 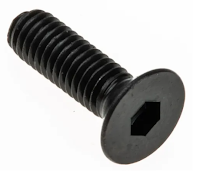 To countersunk a screw, you need enough material thickness for the screw head. I looked up some tables and concluded that M3 (3 mm) screws would work. An Ø6.3 mm 90 deg countersink tool is needed for a M3 countersunk screw head.

To cut the hood, I used a multi cutter tool with a circular saw blade. This cut through the hood like butter, was easily controllable and produced much less dust than an angle grinder.

I did take multiple measurements before cutting! I did not have a template, so I had to trace the vent on to the hood. I then offset the trace with 18 mm.

I've only been on a quick drive after installing the vent. The main objective with the hood vent was to increase the efficiency of the radiator and oil cooler. Even at the modest speed of ~55 mph, I noticed an additional bonus - reduced front end lift. The front end felt more planted and the steering was heavier. I didn't expect that.